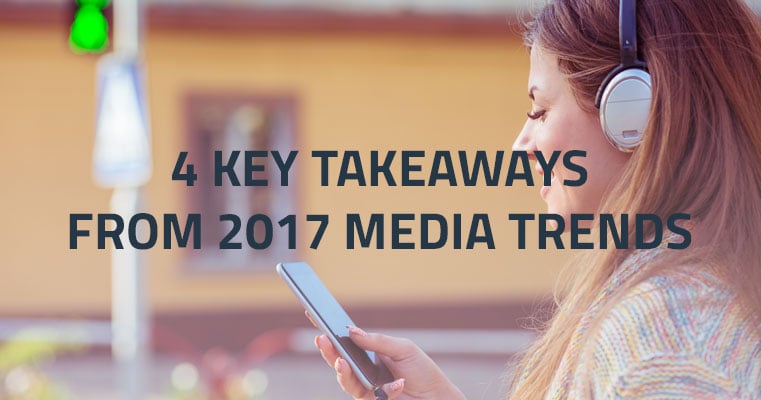 As we enter 2018 in earnest, it’s important not to forget the lessons of last year. Examining 2017 trends gives us hints as to where people’s media consumption habits are heading in the future. In order to reach your target audience effectively, it’s important to understand the kinds of media that they’ll be spending most of their time on in 2018.


Here are just a few key takeaways from last year to keep in mind going forward:

On a typical day, internet users now estimate that they spend almost 6 1⁄2 hours online. Much of that time is spent on a smartphone or other mobile device rather than a laptop - as much as 55% (source) - making it crucial for your ads to be easy to access and mobile-friendly. At Right Idea, we like to cover all our bases - we have extensive experience creating online content for both mobile and desktop consumption.

Online radio streaming services such as Pandora continue to grow. A survey last year found that 32% of survey respondents (39% of those aged 12-24) tuned in to Pandora regularly (source). Depending on your target audience, this can be an important area to consider for advertising spots, as the convenience and customization it offers makes it attractive to tech-savvy Millennials.

Just because people are spending more time online doesn’t mean they’re leaving traditional radio and TV behind. This year adults will spend 1 hour and 26 minutes per day on average listening to the radio (source) - meaning it’s still a major source of media consumption. Here in Omaha, radio is still going strong - with as many as 87% of people over 18 reported listening to the radio regularly in 2017: 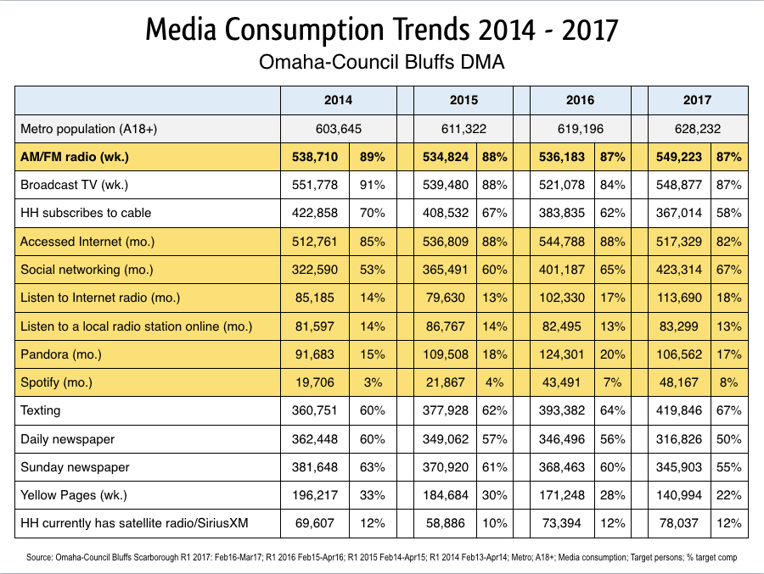 As for TV, while it has seen a small decrease of a half hour in daily watching in the past 5 years, that still leaves it at an average of 4 hours a day. While that’s still a sizeable audience, it’s important to consider how this half-hour decrease has been spread out over age groups.  Millenials watch 40% less TV than 5 years ago, while the 65+ group actually watches 10% more (source).

Average time spent on social media has increased by half an hour since 2012,  rising to a whopping 2 hours a day (source). The more social media becomes an increasingly dominant force in people’s lives, the more important it is for advertisers to grow their social media following.


If you’re looking to utilize these media trends to push your business in the right direction, Right Idea can help. Give us a call today!